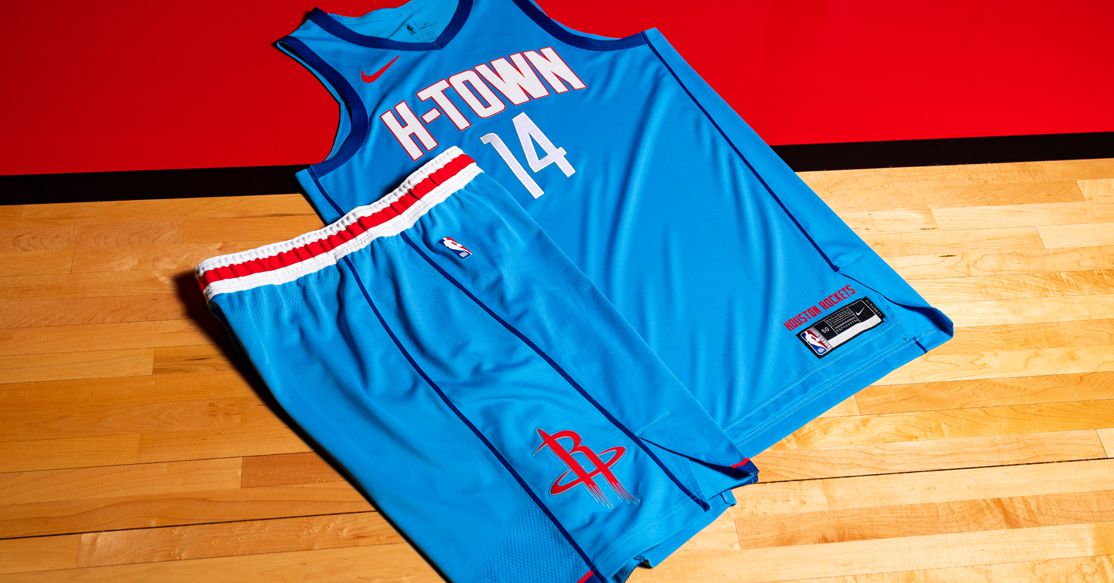 Wednesday night at the oh-so convenient time of 7:13 *wink wink*, the Houston Rockets announced the arrival of their 2020-2021 City Edition jersey with a heartfelt video dedicated to the city.

Just like how last season’s NASA-themed City jersey paid homage to the space center’s history in Houston, these jerseys pay homage to Houston’s sports history. The irony is that while the video shows flashes of the Astrodome and that beloved Clutch City team, it doesn’t mention the greatest influence on the colorway: the Houston Oilers.

The jersey features red, the Rockets’ staple color, and dark blue — possibly a representation of the pinstripe jerseys of the late 90s and early 2000s — but its primary color is that famed baby blue donned by the Oilers in Houston for nearly four decades. And Just like the “NASA” jerseys, it features the “H-TOWN” on the chest.

If you’re still not privy to how the Nike NBA jersey rotation works, this is one of the four sets the Rockets will wear this season. Gone are the classic home and away plus alternates — the teams will continue to rotate four colors. For Houston, that means their red set, white set, black set, and now their baby blue set. Yes, the throwback ketchup and mustard remains a one-time thing.

As far as the grading of these jerseys go, they unfortunately fall very flat. Houston fans, including myself, have been waiting for the return of baby blue in any capacity to a local team as an alternate, but in retrospect a basketball uniform was probably the worst choice. Without the white pants that made those Oilers uniforms pop so beautifully, there’s just so much blue, and it feels like an empty canvas. The jersey would have probably worked better if they went with “Houston” instead of “H-Town” and/or if they added some sort of graphic or pattern between the number and the shorts on the front in a different color. The good news is that they are inching just a BIT closer to a more creative and fun City jersey.

Where the team DID succeed is the merch.

OH MAMA, that freaking merch is so beautiful. From the ball caps and beanies to the t-shirts and pants, they nailed this. Seriously, I had to abstain from buying so much stuff on the first day. Truly, it made the rollout of this kit so much more worth it.

Truthfully, I hope to be wrong, and I hope that these look much better on the court, but as of right now, there feels like there was so much untapped potential here. Still, it is a delight to see the baby blue back in Houston. Luv Ya Blue.

Motherhood across the animal kingdom